Causes of Yankee Chatter (Part 2 of 2)

In Part 1, two major sources of chatter causing vibration were highlighted: chemistry and doctors. In this post, we examine the impact excessive moisture can have on Yankee chatter.

Excessive Moisture and Uneven Moisture Profiles
One of more difficult areas for tissue makers to troubleshoot during Yankee operation is the condensate removal system because most of its operation is not visible. More likely than not, instrumentation is lacking or poorly maintained leading to unreliable information and “drying blind.” If the Yankee becomes too hot, it can “go square” leading to pressure roll bounce and massive vibration forcing the Yankee to cool too quickly or shut down. This type of vibration is heavy and dangerous. Other issues that can result include non-uniform shell temperatures that lead to hot and cold spots typically caused by localized syphon plugging or internal leaks and the improper operation of the dryer drainage system. In modern dryer drainage systems, blow-through steam is used along with managed differential pressure control to remove condensate.

An uneven moisture profile is a factor in the majority of chatter events. Wet streaks can wash off the Yankee coating and eliminate the protection for that area of the Yankee. Dry streaks cause a heavy coating due to the higher temperature and result in a heavier coating that cannot be removed evenly. Wet streaks next to dry streaks are a major source of poor blade wear and increased vibration. The suction pressure roll (SPR) is another major source of uneven moisture profiles. A worn SPR will dewater at a significantly different rate. And, if the doctoring of the water sling off the roll is inadequate, the unremoved water will flood certain sections of the nip resulting in uneven moisture profiles. 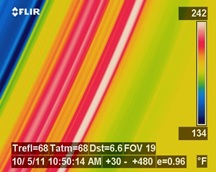 After break in, the Yankee clothing performance will deteriorate through a normal life cycle. The clothing must be replaced after some period and the cycle repeats. As the clothing operates, it picks up soils and other contaminants that limit its ability to properly dewater at the nip causing the sheet to the Yankee to get wetter. A wetter sheet may cause too much cooling on the Yankee and the coating is, in turn, not properly set and protection is reduced.

The thermal image to the right shows how the wet felt will cool the Yankee surface just outside the sheet (the middle orange band between the red zones). This cooler strip, in most cases, will contact the felt and this free water will cool the area and wash off any organic coating in this region allowing for excessive blade wear and eventual blade chatter outside the sheet. Since felts vary in widths over time, this zone will move and must be watched closely to prevent chatter initiation. Proper felt widths must be used to match the internals of the Yankee. Edge showers may be needed to control edge build ups.

Poor Pressing
Tissue making suffers from the effects of poor pressing just like other paper grades. Generally, modern machines use one press, the single press roll (SPR), but many still have a second press that may or may not be loaded. As the SPR ages, the rubber gets thinner and harder. As the P&J hardness of the SPR falls into the low 30’s, the nip may become too intense for proper operation. Another major issue for the SPR is proper adjustment of the water sling off the vacuum zone. Improper adjustment of the SPR will increase the water carried into the nip from water missing the pan. If the machine is designed for a second press and is unloaded, the Yankee deformation is changed and the crown curves of the SPR is likely incorrect. A poor fitting SPR will cause wet streaks and the Yankee protection is threatened.

Speed
Speed is often a root cause of chatter. If operating too fast for the process, the sheet can be too wet and/or streak causing uneven film formation on the Yankee and inadequate protection. Running too slow is also a source of excessive vibrations from heavy coatings on the Yankee. “Limping” a Yankee at low speed without major changes in the chemistry is very difficult to do in a safe manner. Many machines will experience periods of massive vibrations from harmonics in the rolls, Yankee dryer, and doctors at varying speeds. As the Yankee runs faster, harmonics are an issue that must be addressed at speeds specific to each Yankee.

Tools to Measure Vibrations and Yankee Coatings Vibration monitoring systems are available to measure the vibrations on the doctors with accelerometers. A stream of data is continuously fed into programs that help develop operating conditions and procedures to control and reduce the vibration.

Other trending information from the DCS and Yankee torque curves are very useful in comparing different chemistry packages and operating conditions. The torque is sensitive to speed, moisture, and coating film thickness and hardness. Measuring blade wear rates and angles will also help close the gap on finding the best and safest place to operate the Yankee dryer for tissue manufacture.