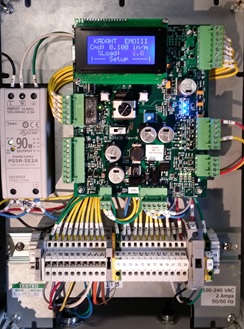 Since it was introduced in the late 1980’s, the EMO III™ electro-mechanical oscillator has set the standard for functionality and reliability in shower oscillation. The reversing, brushless DC motor heralded the beginning of an era of low maintenance and high reliability.

Today, Kadant Solutions announces the release of a new and updated control package to complement its most trusted actuator. The new control system builds on success by adding new control features, better diagnostics, and easier safety compliance; all for the same price.

Control
Perhaps the most appreciated feature of the new controller is the ability to start and stop oscillation with a remote signal without disabling other functions such as configuration, information display, and live monitoring. In addition, we have added the ability to monitor the position and the load from the mill DCS, reset fault conditions from the DCS, and fully retract the shaft in preparation for maintenance. The local two-line display can be user configured to present any of 15 selectable operating parameters such as speed, position, load, and many more.

Diagnostics
The new EMO III electro-mechanical oscillator has enhanced diagnostics, now with the ability to tell you which component or circuit has failed or has been wired incorrectly. The controller now maintains a fault history, so you can review causes of problems over time and spot patterns that will help you resolve core causes of maintenance issues. Status LEDs on the circuit board speed trouble shooting and make many types of evaluation possible without the use of a multimeter (power supply status, input status, output state).

Safety
The controller protects personnel, external proximal equipment, the showered surface, and even the oscillator itself. High pressure damage is prevented by cutting off the water supply at a programmable minimum speed. The output thrust can now be limited to a programmable setting between 500 and 2500 pounds-force, making the EMO III electro-mechanical oscillator the most powerful oscillator with the lightest touch. Lockable cabinet latches prevent unauthorized access while the lockable disconnect switch ensures the safety of maintenance personnel.

The new controller fits on the same mounting standoffs and has the same connector pattern as all of the previous EMO III electro-mechanical oscillators. The new version also has a backward compatibility mode that disables some of the new features and mimics the legacy controller operation.