The History of the Rotary Joint

Throughout the 19th and early part of the 20th century, the accepted method of supplying water or steam to a rotating cylinder was through the use of stuffing boxes or packing glands, which proved inefficient. The more these sealing materials wore, the more they leaked.

In August of 1933, R.O. Monroe and L.D. Goff, in conjunction with a local mill, designed and built the first rotary joint. It was a device that eliminated the problems associated with stuffing boxes and packing glands and allowed the water or steam to be introduced in a much more economical method. A spring-loaded mechanical seal was used to prevent the fluid or gas medium from dispersing. The secret to the rotary joint’s mechanical success was in the seal. It allowed parts of the rotary joint to rotate with the machine, while providing a leak proof seal for the fluid or gas flowing into the cylinder.

During the late 1930s and into the 1940s, rotary joints became the preferred method to admit fluid or gas into a rotating cylinder. Still, there were some problems associated with installation of the rotary joints. After World War II, several innovations were applied to rotary joint design. One of these was the use of flexible metal hose, which allowed the rotary joints some flexibility in movement as the seal wore. By 1946, several updates had been incorporated into the original design, and sizes were added to better accommodate the needs of the various industries requiring rotary joints.

By 1954, a complete redesign of the rotary joint was underway, mainly to reduce the physical size of the unit and to better accommodate the needs of specific applications. By 1957, many industries were also concerned about increasing the efficiency of heating and cooling within rotating cylinders. Kadant Johnson began a program of researching the effects of various types of syphoning devices (both rotary and stationary), and the effects of syphon clearances on the overall heat transfer from inside the rolls to the shell.

In 1959, a 60" x 250" (1.5 m x 6.35 m) paper dryer was converted for testing by Kadant Johnson, and actual testing of both rotary joints and various syphoning devices began in Pensacola, Florida, USA. In 1962, a research facility was set up in Three Rivers, Michigan, USA; and in 1963, the first pictures of the inside of an operating dryer were produced on 16 mm film.

People involved in designing and operating machines that required rotating cylinders learned a great deal about steam condensing rates and the actions within a dryer from these first films. Rotary joint technology and syphoning technology was shared with industry. 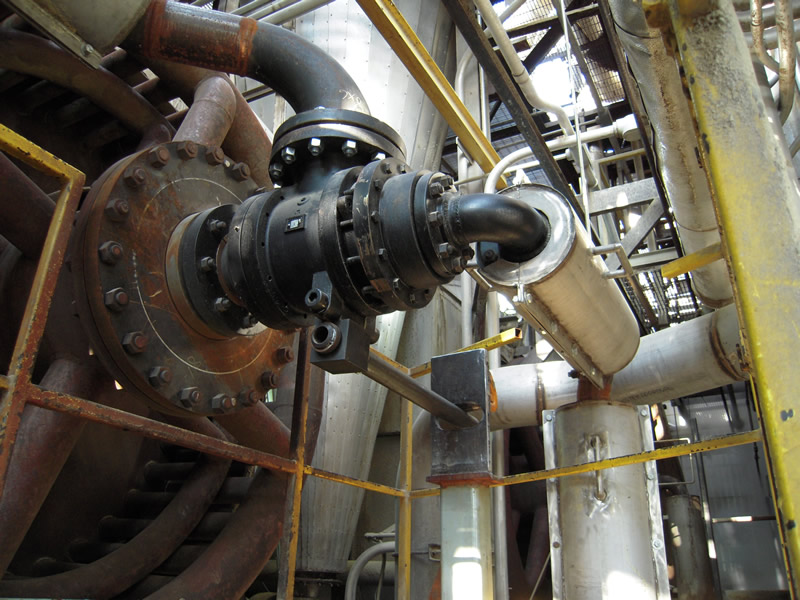 Through the late 1950s and into the early 1960s, this team of researchers continued to develop new designs and gather knowledge to address the needs of general industry. The need for higher operating temperatures and speeds required that the designs of rotary joints change again. Details such as quick disconnect nipples, pressure compensators, larger sizes, and longer service life were developed.

Into the late 1960s and early 1970s, various new seal materials, such as plastic, Teflon™, and ceramic were also tested.

While the early years were focused on sealing steam and water joints, today there are thousands of configurations of standard and custom rotary joints: self-supported or externally-supported; single- and dual-flow; applications using water, air, coolant, oil, molten salt, and gas; temperatures from very low to more than 1,000° F (538° C); and speeds from 1 to 50,000 RPM.