Why Dryers Flood in Papermaking

At some stage during their working career, papermakers and mill engineers will have encountered at least one instance of flooded dryers in the drying section on their paper machine. But more likely they have experienced numerous occurrences of flooded dryers. Sometimes dryers will flood and then recover without the paper maker even being aware of the events.  However the drying efficiency and machine stability is compromised when dryers are flooded. 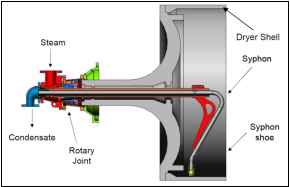 Saturated steam enters the drying cylinder through the rotary joint and fills the entire dryer volume. Heat energy released by the condensing steam is transferred to the wet sheet through the drying cylinder shell, causing a layer of condensate to form inside the dryer. A bi-phase mixture of condensate and steam exits the dryer though the horizontal pipe of the syphon. The steam that passes through the dryer uncondensed is termed blow-through steam. During normal operating conditions, the rate at which the steam condenses is equal to the rate at which the condensate evacuates from the dryer.

The behavior of steam and condensate on the paper machine is described in a series of articles published in APPITA TECH NOTES.  In the first article in this series, the subject of condensate behavior inside the dryer cylinder was introduced (Vol 1, No.4).